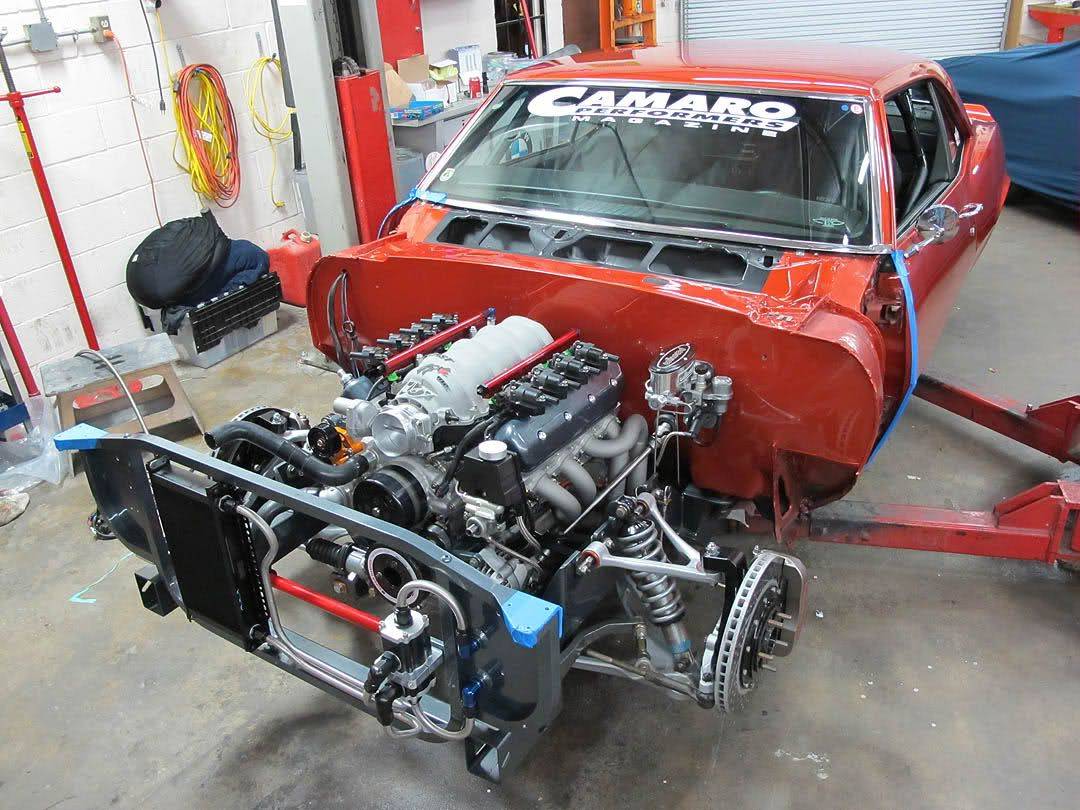 For nearly two decades, there has been a flood of aftermarket frames hitting the market that use the late model Corvette style uprights, and control arms – usually coupled with a Mustang style rack and pinion. The general consensus is that this is a huge step from a modified stock style frame using aftermarket control arms, and sometimes an aftermarket upright of a given geometry, and we at Lateral Dynamics would agree with this. But there are always compromises, so where are they in this approach? 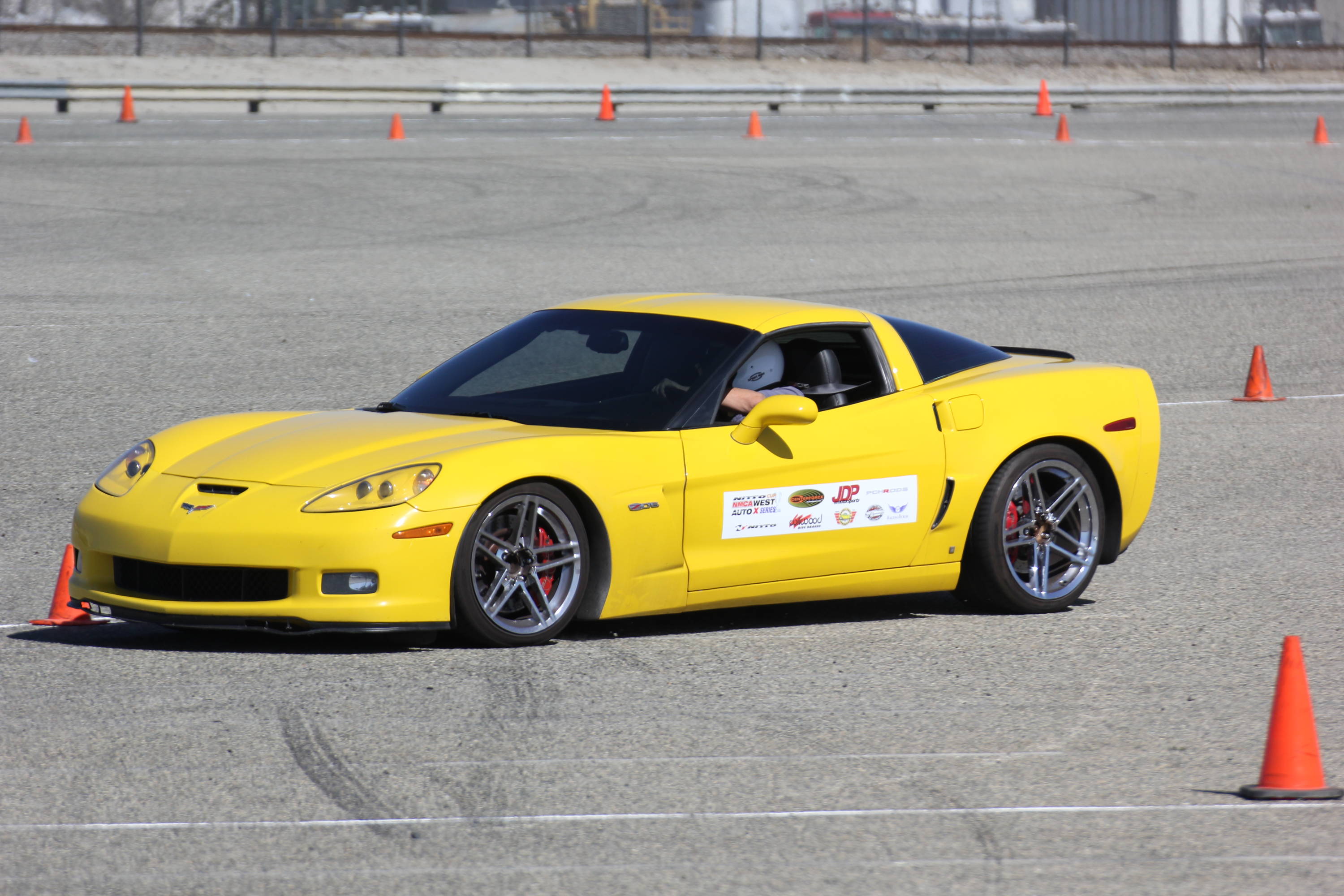 Before getting into detail about areas of dramatic improvement on virtually all of the current offerings, let’s consider the Corvette suspension as it exists in the factory OEM configuration. GM introduced the C5 era Corvette in 1997, and has since also released the C6 and C7 era Corvette platforms with incredible success, both as a factory vehicle for the populace, as well as an incredibly successful racing presence in International Sports Car Endurance racing, with several incredible wins at the most difficult events in the world, including multiple class wins at the pinnacle of racing – The 24 Hours of Le Mans. The Corvette is well known as the American supercar, reaching a broad audience because of its incredible performance to cost ratio. What most people probably aren’t aware of, is despite the continued progression in overall performance of the latest era C7 Corvette, the fundamental suspension since 1997 is almost identical to the current configuration. Think about that for a moment, in 2001 the Z06 Corvette was rated at 385 HP, which at the time was a LOT! The forthcoming ZR-1 is reported to have 755 HP, which is almost DOUBLE the initial supercar’s output! And the suspension is largely unchanged. Clearly the GM engineers hit a major homerun, as virtually every other aspect of the car has changed dramatically.

So it probably makes great sense to swap that suspension into an early car to dramatically improve the overall performance, right? Well, yes, and no. First, the parts are a great place to start due to the basic quality and price point – GM makes a LOT of these parts so the pricing is attractive. In regards to the uprights, hubs and brakes, the OEM parts are fantastic, and the aftermarket is even better, and it all just bolts together without any fuss. So all of this is a great reason to go this route.

The challenge comes with packaging, and replicating the OEM geometry in an early model car. The primary reason for this is the engine location – in all of the C5-7 era Corvette’s, the engine is placed well back in the engine bay, which allows the steering rack to be actually placed in front of the engine. GM took advantage of this, and located the rack vertically higher than a typical muscle car, and this creates the first problem. In an early car, the steering rack will almost always need to be located UNDER the engine, which is very different and requires at minimum a new steering arm – take a look and you’ll see that the factory steering arms are cut off of the OEM spindle, and an aftermarket arm is bolted in place. This is not a real big deal in itself. What IS a big deal, is that the mounting of the rack and pinion assembly on the frame forces the Lower Control Arm inner pivots to a lower location due to mechanical interference. The result of this is a significant departure from “OEM Corvette” suspension geometry, it can’t be the same due to this reason. But it can still be pretty good, right? Here again, yes, and no.

Because of this interference, the first item to be affected is the Roll Center height. Without going into the gory details, the RC height is a fundamental predictor of a vehicles performance potential. In the case of the aftermarket frames, the RC height is forced way too low, due to the orientation of the LCA pivots. Specifically, you want the LCA pivots to be higher off of the ground than the typical aftermarket frames. Things get even worse when you want to achieve a very low static ride height, which is what we are all after to maximize performance. The situation can be improved significantly through the use of a “Dropped Spindle,” and some enthusiasts have further improved the situation by eliminating the body bushings – which creates a different set of problems. We developed our “Competitor Series Modular Spindle, Pro Touring Configuration” specifically to improve this situation on virtually all aftermarket C5/6/7 based suspension systems (see the Product page for a comprehensive overview on the benefits of these components, and also see the Tech page for the deep engineering that went into the design). 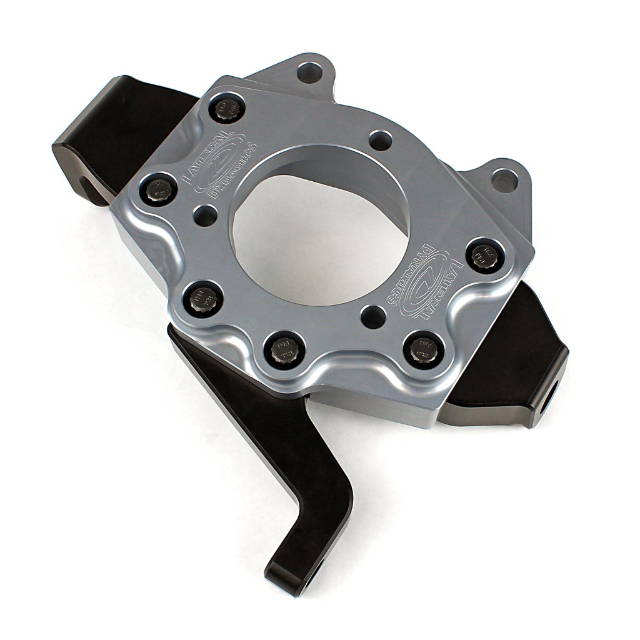 The next issue with not replicating the OEM geometry is a bit sensitive. Frankly, a lot of the geometry and design approaches you see in the aftermarket look the same from supplier to supplier, because they seem to “borrow” each others ideas, which is good when the ideas are sound, but results in bad ideas being propagated more often than not. Consider that many of the suppliers were doing suspension conversions well before the Corvette’ based systems. We can see this very clearly with regard to the geometry decisions that are present on most of the products out there. A lot of this is due to the tire technology twenty years ago, relative to present day. Today’s tires respond in a way FAR different than yesterday’s best. In the past, the suspension was arguably less important because the tire was always the ultimate limiting factor. That’s still true today, but the tires are SO much better, and have been engineered to leverage more “aggressive” suspension geometry.

The clearest example of this is Caster angle. Thirty years ago, it was understood that increased caster would improve many aspects of the performance of a given car. But there was both a practical, and “mythical [M1] ” limit to how much you could use. On early muscle cars for instance, you could dial in additional caster through the use of different control arms – but the “limit” somehow was generally agreed upon that ~5 degrees was enough. And it probably was! Why? Because the tires back then wouldn’t respond to further increases, and on top of that you would run into issues with bump steer, etc. So this became the “mythical” figure. And even when the aftermarket moved to the Corvette hardware, this didn’t change for a lot of the designers that packed it all together, and it propagated to others, and so on. The C5-7 era Corvettes use ~8 degrees of static caster. And this is a HUGE difference from 5 degrees, and is a reasonable starting point for a true performance oriented setup. In order to allow the ability to adjust/align a typical aftermarket frame to this basic starting point, we at Lateral Dynamics developed a solution through the use of fully adjustable Upper and Lower Control arms to replace the OEM parts as a practical upgrade to the original configuration (see our products page for a full description of the benefits of these components).

Caster is but one example of the shortcomings of most of the current aftermarket offerings. Virtually every important suspension parameter is different than the OEM, so one can’t possibly think that adapting this to an early car will result in the same performance as a late model car. And as a result, many of the cars built have reached the maximum performance that the setups will allow.

At the Core of Lateral Dynamics existence is an obsession with high performance suspension systems, and the ability to tune critical parameters to extract every possible performance advantage over the “other guys.” We HATE the word “optimized,” because it typically isn’t true, there is ALWAYS a compromise. Unless you can adjust, you can’t tell if it is at the limit of performance potential, regardless of the supplier’s marketing statements. In the case of a front subframe/suspension, how can one size possibly fit all, when the designer has no idea for instance, what is going on with the rear suspension!!? Our products reflect this challenge. Our aim is to provide the parts necessary to tune the car, fundamentally, to a level unobtainable with fixed geometry components. We also recognize that not everyone needs or wants this, and that’s okay too!